Can Exercise Cut the Risk of Dementia?

Humans were made to move. Exercise is so good for the body that the Centers for Disease Control and Prevention (CDC) recommends everyone get 150 minutes per week of moderate exercise. Regular exercise reduces the risk of a long list of diseases and risk factors, including:

…and even death from any cause. And, Alzheimer’s disease may soon be added to that list.

What Is Alzheimer’s Disease?

Alzheimer’s disease, the sixth-leading cause of death in the United States, is the most common and best-known form of dementia. Dementia is an umbrella term for a number of diseases that cause degeneration of mental processes that can result in wholesale memory loss, drastic personality changes and a breakdown in cognition.

Much remains unknown about how and why Alzheimer’s takes hold and progresses, but prevailing theories revolve around abnormal brain structures known as amyloid-beta plaques and tau tangles. Plaques are protein snippets that build up between brain cells (neurons), whereas tangles are misfolded proteins that form within the neurons themselves. 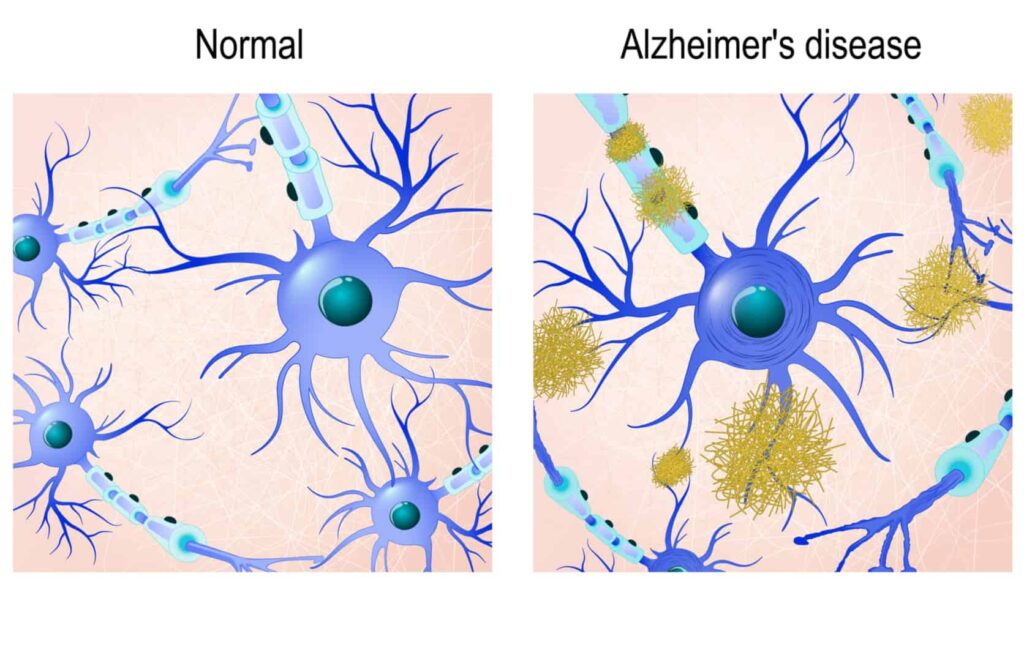 Alzheimer’s is both progressive and incurable. Symptoms start subtly and progress slowly. Some memory loss is a natural part of aging. It crosses into the territory of mild cognitive impairment (MCI)—a precursor to dementia—when it begins to affect daily life. On average, people with Alzheimer’s disease live between 3 and 11 years after diagnosis.

Exercise and Alzheimer’s: How It May Help

Exercise is good not just for the lungs, heart and other muscles, but evidence is mounting that exercise may have both a protective effect against Alzheimer’s and may mitigate its effects.

A 2017 review in The Lancet examined a number of studies on the benefits of exercise for people with mild-to-moderate dementia. While it found few well-designed studies on exercise and Alzheimer’s, most of the studies included in the review showed improvements in cognition for those who exercised compared to control groups. According to one of the studies, higher intensity exercise (greater than 70 percent of the maximum heart rate) produced stronger results.

The authors stated that, “Exercise programmes [sic] for people with mild-to-moderate dementia are feasible and well-tolerated, and exercise offers positive small effects on function for people with dementia, but whether it helps cognition is unclear.”

More recently, a study published in JAMA Neurology in July 2019 looked at data from more than 180 people. The results suggest that higher levels of physical activity are associated with slower amyloid beta-related cognitive decline, as well as a slower rate of brain matter loss. Additionally, it suggests that healthier blood vessels—one of the benefits of regular exercise—was also associated with slower cognitive decline.

Finally, an ongoing clinical trial called the EXERT study is attempting to quantify the effects of exercise on the prevention of Alzheimer’s disease. Participants are adults aged 65 to 89 who are physically inactive and showing signs of MCI. The goal of the study is to see if exercise can slow the progression of cognitive decline.

Obesity has recently passed smoking as the top preventable cause of life-years lost. If you are committed to getting to a healthy body mass index, request an appointment with Advanced Laparoscopic Associates. We can determine if you qualify for weight loss surgery, as well as help you decide which procedure is right for you.